"Why the system is getting national praise for cutting crime. Imagine if police had a crystal ball to predict criminal activity. The city would be much safer. Well, our transit system won a national award for forecasting when criminals are most likely to offend." Click the play button below to see the story (3.8 Mb).

Click the play button below to see the story (3.4 Mb).

"The real success here, " says Ron Gabruck, Director of ETS Safety and Security, "is the validation of our crime forecasting model and our pro-active approach to the safety and security of our passengers and our employees." 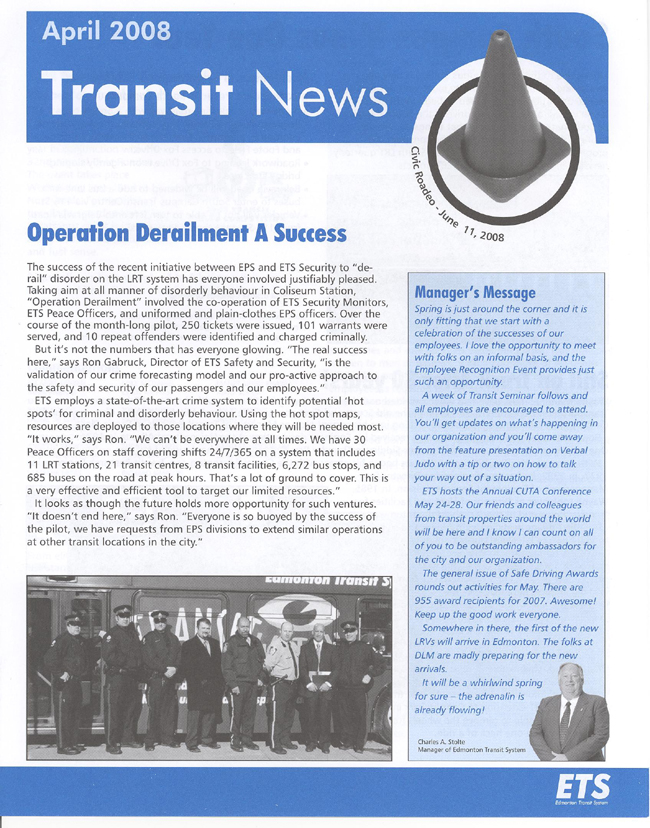 Coliseum Station at centre of crackdown

A four-week pilot project aimed to derail crime out of the Coliseum LRT Station has resulted in hundreds of tickets and eight people being permanently banned from transit property.

Police say the project has resulted in more than 250 issued tickets after receiving 195 calls for service to the Coliseum LRT station.

EDMONTON - A pilot project that had undercover police follow regular offenders using the transit system resulted in eight of the worst being banned from transit property, police say. "(The officers would) wait for them to do something wrong, be there and take action right on the spot," Insp. Brian Nowlan said Tuesday at the Coliseum LRT Station.

Storm Analytics Corporation
Edmonton, Alberta
Canada
This email address is being protected from spambots. You need JavaScript enabled to view it.